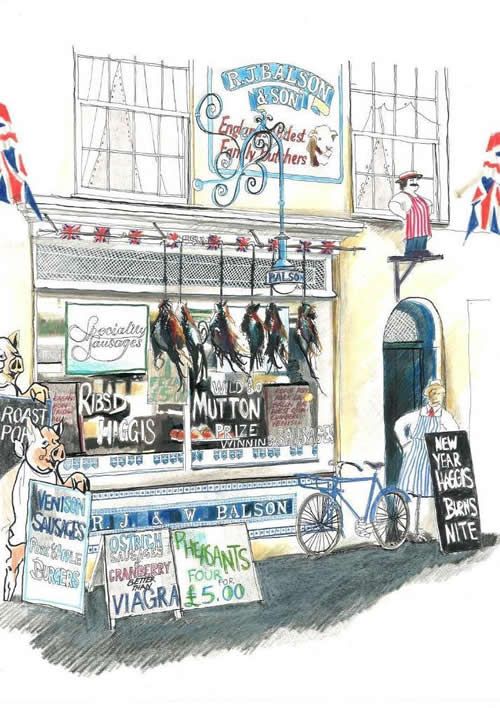 Balson & Son colour tea towel. RJBalson, High Class Butchers, is the Oldest Family Butchers in England. Since 1515 during the reign of Henry VIII and from the birth of Anne of Cleeves, Henry’s 4th wife, RJ Balson & Son traded from the shambles in the heart of the town of Bridport. At this time Bridport was fully engaged in producing ropes and nets and cordage for tall ships around the world. Balsons were trading in the year before the 1st published account of the discovery of North America.

Since then 25 generations of butchering skills have been passed down to today. From farm to fork all their free range produce is sourced locally from the surrounding farms.

Featured in the BBC’s ‘A Taste of Britain in 2014 and winner of Bridport Business Award 2020 Balsons has being recognised worldwide.

They are members of ‘The Tercentenarian Club’ which exists to celebrate 300 year old family businesses which include ‘Hoares’ The Bankers and ‘Fortnum & Mason’ in Piccadilly, London.

The tea towels are made of linen union (45% cotton & 55% linen) full colour printed on bleached white finish. Sized at 78 x 48cm, hemmed on the two longer sides. The towel is sold inclusive of a card of the same image. 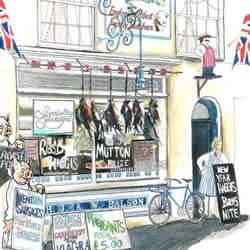